Master of Your Domain

Living alone means that all the household chores are my responsibility. While I generally don’t mind cleaning—thank you OCD!—and actually find it relaxing at times, there are certain annoyances that I will not tolerate.

You have to put your foot down and assert your domestic dominance, as giving in to an appliance or a dust bunny only shows weakness, and trust me, these things prey on weakness.

Take for example the vacuum, whose job description literally entails it sucking crap up. 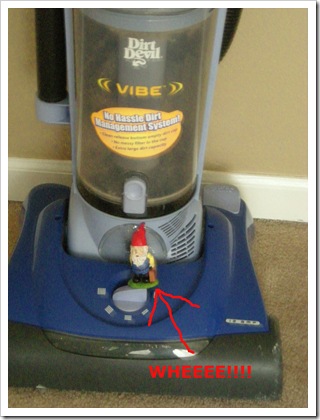 Without the suckage, it’s simply a large noisy thing with a light on the front that terrorizes the cat (a bonus feature they really should advertise, come to think of it.) Because of this, I will stand over the vacuum for 10 minutes and force it to suck up a string before bending over and picking that crap up myself.

I did not spend five minutes five years ago picking out a vacuum so that I could pick up the debris myself, good sir!

And I often find the dustbuster—named as such because it’s supposed to bust the dust—to be more temperamental. It will often passive aggressively push dust around the room instead of actually sucking (busting?) it up.

Unacceptable. I will run the little bastard until it needs to be charged to make sure that it busts up that one grain of rice it spit out. Suck it up and do your job—literally.

A more seemingly innocuous perpetrator is the mini-blind. No, I’m not going to suggest that you actually clean a mini-blind, as it’s a scientific fact that much like shower curtain liners, it’s easier to just throw them away and get a new one.

This involves the raising and lowering of said mini-blind with those two little strings on the side. 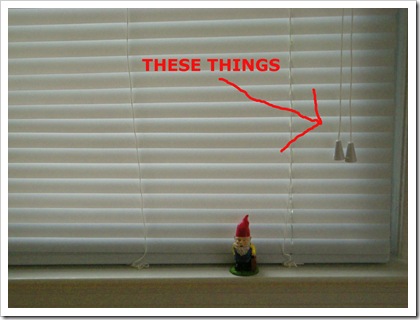 It seems simple enough, but one wrong pull and you have a completely crooked blind with one side way up to the left while the other sags down to the right. Then you try and straighten it out and the right side goes up while the left side sags down.

Do not accept this asymmetrical configuration of window coverings, my friends. I don’t care if you stand there pulling on each string for an hour like you’re milking a cow. If you don’t even that shit up, the next thing you know you’re literally blinded by the light.

Moving on to the bathroom, I feel the need to warn you that the toothpaste that leaps off your toothbrush like a kangaroo will immediately become as stubborn as super glue the second it hits—and adheres to— the sink.

It can be tempting to let that slide, and you might even consider it “artsy” to have patterns dotting the sink interior. Stop the madness. Nine out of 10 dentists agree that one must immediately scrub the spot in the sink, lest one falls into the cavity of cleaning complacency.

Plus, that crap stays glued on.

This last one isn’t really about cleaning, but I will try and make it helpful by saying you should clean your remote control. I read somewhere that there are 12 teen million germs and probably the origins of the swine flu on the average remote, so Clorox that thing ASAP.

Possible HAZMAT situation aside, my issue is when the remote control simply gives up. The batteries are new, the little red light at the top of it blinks when you maniacally press down the buttons with increasing rage, but yet…no action.

Do not—I repeat—do not change the channel yourself.

Stand up right next to the TV and force that remote to change the channel, adjust the volume or set a reminder to watch Baseball Tonight. And henceforth from said display of power, refer to it only as “the remote.”

Why? Because as with all the domestic dysfunction in your house, you are the one in control.

Never let them forget that.