Last week felt like that moment you get in your car and hear only the last two seconds of your favorite song. Things most certainly could be worse, but it was a series of frustrations—a $200 bee exterminator fee, a leaking faucet, etc.—that culminated with me actually writing a blog post.

(I know. I should have called my sponsor for an intervention.)

Anyway, to say that Comcast is a frustrating company is to say that a Kardashian takes a selfie or two now and again. This won’t be a (well-deserved) Comcast rant—but it’s an important detail to the story.

I was working on Friday morning when all the sudden both my TV and Internet went out. Great. I immediately freaked the hell out—in part because I work from home and in part because that’s my default mode when things are out of my control, which is super helpful.

I looked outside and there was literally a cable cut and hanging out of a tree into the street in front of my house.

Long story short, it culminated in more than 13 phone calls to Comcast, five live chats, etc. and being told that since it was a safety hazard it was a “top priority” and “escalated” for techs who would be out there that day by 1…and then by 4 and then 5.

See where this is going?

It was a whole day of supervisors lying to me, apparently, because no one actually showed up to my house until 1 pm on Saturday. In fact, the energy company had to remove the cable from the road because of safety reasons that Comcast evidently didn’t find quite important enough to address.

Anyway, here’s the moral of the story (other than the hatred I have of Comcast.) 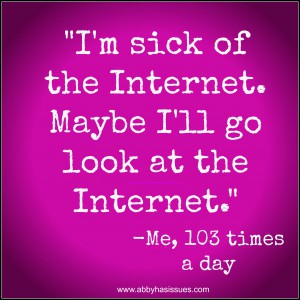 I enjoy my job. My job is 100 percent online, and I enjoy being online even when I’m not working. But there comes a point when you’re forced to go without it, and you’re forced to face reality—and not in a virtual sense.

I should preface this with the fact that the issue goes way deeper than just being online with me—my OCD, depression, exercise addiction, etc. have been out of control these past months and it’s a separate post.

But it took literally having this cord cut for me to realize how much I retreat to a repetitive world, covering the real issues with a virtual Band-Aid.

In those rare moments when I’m not working, I mindlessly click around the same few websites, TV show in the background that I’m not really watching anyway.

It’s really a metaphor for so many other issues with me (see above.) Is it easier to dig deeper and take steps to be healthy and happy long term or distract myself with overexercising and the Internet and worry about real life later?

The thing is, it’s easy to rationalize.

I don’t have a smartphone because I don’t want to be one of those annoying people constantly checking my phone in line, in the car, when talking to people, etc. Yet everyone ignores how destructive this behavior can become because there are so many other people who do the same thing.

It’s easy to rationalize my OCD/exercise addiction because there are so many people who ignorantly claim to “wish they had my problem,” even though my health is so bad I should probably be hospitalized and the emotional (and physical) investment I place on these routines completely disrupts—and in fact, pretty much rules—my life.

Maybe part of it is that we (I) don’t always feel like there’s really anything else to stop for because these things become the life that we’ve created, for better or worse. To cope with certain things, we develop habits that have nothing to do with actual meaningful goals just so we have a distraction, a way to fill the time.

For me, even living with the constant “something is seriously wrong here” feeling, I often can’t make myself stop doing what I know isn’t healthy.

It would take being put in the hospital again to get me to stop exercising. It would take having my depression get so bad that I scare myself in order to go back to therapy. And it did take having the cord literally cut for me to realize how purposeless so many things have become.

Yes, we all need distractions—they aren’t all bad, that’s for sure. But we (I) also need intention.

I was able to work from my mom’s on Friday and Saturday, and once the basic stuff was out of the way and I had “fun” time, you know what I did?

I sat staring at the computer screen wondering what the hell I was doing. It took me 10 minutes to go through Facebook and Twitter and email, and then…mindless clicking. And then something clicked. There was nothing I needed that second that wouldn’t be there when things worked at home again.

So I shut it off.

I went home and finished a magazine. I put in a DVD (that still worked even though cable was out) and actually watched it—not just had it on in the background while I was online. I wrote a rambling blog post that probably 10 people will read.

And while it was a pain in the ass for two days, life went on, as it tends to do.

Because unlike service from Comcast, you can always depend on that. I owe it to myself to pay attention.