There are a lot of people who like beer. 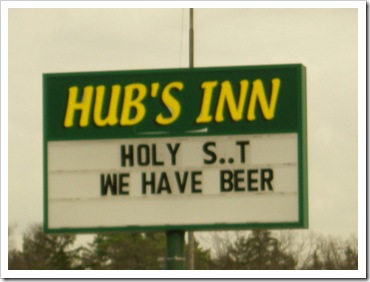 A sign from a bar near my house.  Apparently they didn’t have a liquor license for a bit and were really excited to tell people they got it back.

In fact, a majority of people I know love beer and I’m pretty sure I could have paid for my college tuition with bottle returns from family functions if my crazy uncle didn’t hoard them every time so he could buy batteries for his metal detector.

But I, for one, couldn’t care less about beer. In fact, I’ve never had more than a sip of the stuff and despite the fact that it would be a cheaper option than my Vodka for the couple times a year I have a drink, I have no desire to try and acquire a taste for it.

Is it because I worked as a cocktail waitress the summer of my 21st birthday and the exposure to dollar drafts and douchebags debauchery turned me off?

Possibly, but that didn’t stop me from “sowing my oats” and celebrating that whole summer. I have stories, but I also have memories of having to serve Mexican food while nursing the worst hangover of my life due to an ill-advised Four Horseman shot and half a bottle of Vanilla Stoli after work the night/early morning before at a frat house.

It’s been nine years and I still can’t smell vanilla without getting nauseous.

At any rate, I never took to beer. I also tried to like wine, but it gave me a headache and reminded me of church, which just made me feel guilty on top of feeling hungover.

But that brings me to the stereotypical beer vs. wine person debate.

There used to be this image of beer drinkers being “everyday” blue collar workers asking for Busch in a can at a restaurant and crushing the can on their foreheads, while wine drinkers were women who “did lunch” and requested pinot with their pedicures.

When I was serving I had a woman who always sat on the patio and ordered draft beer in a wine glass because she wanted to drink beer but look classy to the people walking by.

Yes, because fine wine always has a tan hue and a head of foam.

Anyway, at least around my city, microbreweries and beer festivals have been popping up just as much as wine bars and vineyard tours. It’s not just Miller Lite now, but beer with ingredients like fruit, chocolate and coffee, meaning there are more options and more people taking to the hops.

This also means the stereotypical “lines” are blurred and there are now beer snobs and wine pounders, wine snobs and beer pounders, men who drink wine, women who drink beer and that weirdo who will ask for her beer in a wine glass.

I still get confused with all the options and considering the fact that I’ve only tried the crap from the tap and not some hoity-toity mix of hops, I admit I can’t really say I don’t like beer.

However, I don’t think I’m willing to try.

If I’m feeling the need to imbibe, I’ll just spend my money on a Vodka gimlet, fully aware that one is all it takes to turn this lightweight into an (even more) unfiltered karaoke queen ready to perform “Baby Got Back” with the enthusiasm of a used car salesman doing his own commercials.

But if you need to grab a beer—holy s*#t—I can tell you where to find it.

Side note: If you’re still having a problem leaving comments, here’s a pseduo-explanation from the “Happiness Engineers” at WordPress. My self-esteem is based entirely on external validation (and sarcasm), so let’s get this issue resolved, now shall we?

Sex, Drugs and Rock and Roll

I spent the night in his oversized T-shirt in his undersized bed, staring at the ceiling and wondering why it was spinning, his soft laughter in my ears when I shared with him my wonder.

He acted like a complete gentleman that night, despite the fact that I wanted him to be anything but that at the time.

At 21 and newly single, I had fallen into a pattern of discovery.

Most nights were spent at the bar—working first, playing second—short shorts and long nights. I countered my good girl image with a raw sexuality and harmless flirting that left them confused and intrigued, not unlike myself at that point. I was getting culture—bar culture—and discovering more every night.

He was a local celebrity of sorts, a regular at the bar and a bit older than me. Our love of sports and sarcasm made us fast friends. I was invited to game-day parties and cookouts, making new friends and no plans, discovering the fun in spontaneity and Stoli.

That day was hot and full of cool drinks, more than I could count. There was hummus and things on the campfire, pitchers of drinks that fueled guitars and singing and dance.

To this day I still associate the last song I remember hearing them play as I sat around the campfire, a bottomless glass in my hand and a fuzzy recollection of time—The Rolling Stones, no less.

The ride home is a blur, as is much of that night, but I know where I ended up last. In his oversized T-shirt in his undersized bed, staring at the ceiling and wondering why it was spinning, his soft laughter in my ears when I shared with him my wonder.

He acted like a complete gentleman that night, despite the fact that I wanted him to be anything but that at the time.

Yes, the first time I slept with a man after sleeping with someone so wrong for so long, I learned a little about sex, drugs and rock and roll.

(Even if you don’t know it at the time.)

This trip down memory lane was in response to the Red Dress Club RemebeRED prompt:

How would you fill in the blank?

This is written for the Studio30 Plus prompt this week– "Las Vegas.”

Just thought I would throw that out there.

Let’s get the cards on the table.

First of all, I am not a prostitute.

If anything, I am a goodwill ambassador—a cheerleader for those of you who roll the dice and play the odds. My job is to bring you drinks. It is not to be your therapist when money’s pissed away, and I sure as hell don’t work this hard for IOUs and winks.

While the uniform is not my choice, I actually quite like it. There are women who sometimes look at me with disgust and ask how any self-respecting person could work in Vegas, serving (gasp) liquor nonetheless. To that I say, “I am working in Vegas, serving drinks and making money. You are in Vegas, drinking those drinks and spending money."

If you’re not, your husband/boyfriend is. Trust me.

I would rather be me.

Drinks while you’re gambling are meant to keep you playing. They’re just little perks to give you something to celebrate with when you’re winning and they’re supposed to make you a little happier while you’re losing. That’s all. It’s not supposed to be a stressful ordeal, so don’t think too hard about it.

As a side note, do not ask me if I have a drink menu or if we have a specific wine you drank once back in 1996. You’re at a slot machine, not a fine dining Parisian bistro. Know what you want and appreciate the fact that it’s free.

Speaking of that, a minimum dollar a drink tip is standard. If you “don’t have change,” “your girlfriend will be back with the tip” or “you just lost all your money”— in other words, you’re planning on stiffing me — don’t beat around the bush. Every time I bring a drink I’m trying to make money. If you’re not going to give me a tip, I’m not going to stand there and waste more time.

On the flip side, if you have my tip waiting for me when I bring your drink, you will get special treatment. Not only do I know that you’re expecting me to return and are ready to compensate me for my efforts, but it also lets you keep playing without stopping to dig for money. This shows me you are at least mildly knowledgeable of the environment and less likely waste my time.

Finally, I have no “house” secrets that will bring you untold riches with a roll of the dice or a pull of a lever.

What I do have is a uniform that smells like spilled drinks, a head that often hurts from the constant lights and the noise and a mortgage to pay of my own. I’m not a dealer, a psychic or a concierge.

If anything, I am a goodwill ambassador—a cheerleader for those of you who roll the dice and play the odds.

My job is to bring you drinks.

Well, that was fun.

Now let’s pretend you’re in Las Vegas and not at work reading blogs when you should be doing “ASAP"  things for other important people who have no idea how to do them on their own.

What would you order for your first free drink?