A Letter to My New Vacuum

Welcome to the family! Before you get too comfortable in the front hallway closet, I think I should let you know what you’re getting into and just who you’re dealing with here so we start out on the same page.

For a little background, I should let you know that I’m actually pretty excited about having you here. I’m a little OCD and I have to admit that there’s an odd, slightly-sick sense of satisfaction when you’re running the vacuum and hear it actually sucking up crap from the floor.While this means there was crap on the floor, this also means that the vacuum is doing its job and the floor will be clean again. 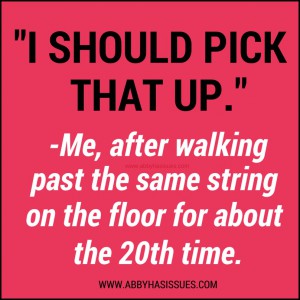 (You know this, as you are a vacuum yourself and familiar with job satisfaction.)

Anyway, then there comes a day when you’re going about vacuuming and note that there is no sound of things being sucked up—presumably because you live in an immaculate abode and never accidentally knock a measuring cup of uncooked rice on the floor, hypothetically speaking—and blissfully continue on your cleaning journey.

But then you remember that you’re me, and that last night you knocked a measuring cup of uncooked rice on the floor. And despite your best efforts with the dustbuster, you know you were bound to miss a few grains of spilled rice because there were about a million grains of spilled rice and your rage was slightly blinding.

So you snap out of your delusional state of flawless floors and start to pay a bit of attention.

One pass over the couple stray grains and no satisfying sounds…hmmm. Maybe it’s because they’re so tiny. After the second pass without any sounds, you realize that this vacuum sucks—and not in the way it’s supposed to—and that it’s starting to smell like burned rubber.

In the blink of an eye, it’s like the vacuum is suddenly offended that you asked it to do what it was bought to do and starts sending off odorous smoke signals that roughly translate to, “Oh, you wanted ME to pick that up? Well, I never….”

If you’re me, you’ll keep trying for a couple more minutes, yelling instructions and possibly profanity at the vacuum as it passive-aggressively pushes the rice over the floor before realizing you are now the proud owner of a large noisy thing with a light on the front that in its own special way, has requested an early retirement.

That brings us back to today.

When I sufficiently recovered from the vacuum betrayal above, I set out on a mission to fill that hole in my appliance arsenal, headed to Target and returned home with you—as you know—and half a dozen other things I more than likely didn’t need.

After a quick assembly and a trial run, I’m happy to report that so far, so good. You seem more than up to the task, and I have no doubt that together we can embark on a mutually beneficial relationship of sucking crap off of the floor, from in between the couch cushions and possibly the front of my shirt.

And while I’m happy to have you aboard, I would also like to remind you that if at any time you decide to get a bit lazy yourself, I always keep the receipt.

Like Loading...
This entry was posted in Uncategorized and tagged cleaning, domestic disability, Target, vacuum. Bookmark the permalink.

30 responses to “A Letter to My New Vacuum”