I’ve been doing this blogging thing for a few years now, which means I occasionally give people the impression that I might know what I’m doing.

Once in awhile I’ll receive an email asking me for blogging tips or tricks to be successful, at which point I spit out my tea in surprise and make sure that the email was actually intended for me.

The fact of the matter is, I don’t really have any clue, mostly because I don’t know what “successful” really means. 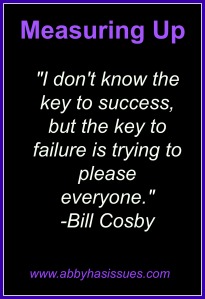 Whenever I see things that other people are doing—publishing books, appearing on the Huffington Post, getting a lot of comments, etc.—I admit that I get jealous and then sometimes a bit insecure, which is stupid considering that I’ve published books and have appeared on the Huffington Post.

But when I do something, I often dismiss it as “no big deal” in comparison to what everyone else is doing. It’s easy to fall into this trap because we keep coming up with new things to measure—Twitter followers, Facebook fans, Pinterest pins, etc.—even though those really don’t have a lot to do with how much impact you actually have or if what you do is actually decent.

After all, you can’t tell if a book is any good by the number of words it contains, even though that’s easily measured.

The fact is that now that everyone can write, publish, etc. there is a lot of noise and poorly written stuff cluttering up the Internet. Some of it “goes viral” and leaves you staring at the computer and wondering, “Why not me? Weren’t those last couple status updates or tweets funny or clever enough? Why aren’t there more comments on my last post?”

The deafening silence can cause you to doubt yourself and wonder where you went wrong.

This, my flustered friends, is where it can be tempting to jump on the bandwagon and do what seems to be working for everyone else. That’s why it often seems like there aren’t many new ideas — simply new people regurgitating the same things people have said in the past and being praised for reinventing a wheel that’s been rolling for years.

But this just in: If you’re doing what you want to do—not what you think you should do—you’re doing everything right.

It’s unrealistic to assume that whatever you’ve made—art, writing, cooking—is something that everyone everywhere should embrace. And even though it’s hard to stop measuring things that are measurable, the best things don’t measure well by conventional means.

The most popular isn’t necessarily the “best,” and personally I don’t want to mirror what’s around me, especially if it’s mediocre.

So even though I still stress over the silence that I often hear, I’ve come to learn that everyone is different. I write because I love it (most days) and while I’m willing to work hard, I’m not willing to change who I am just to please the masses.

I would like to think that walking away from those that don’t get it unlocks my ability to do different things, to create whatever it is without worrying what somebody thinks.

I guess that’s what I call success.

Like Loading...
This entry was posted in Uncategorized and tagged art, being humbled, blogging, books, HuffingtonPost, writing. Bookmark the permalink.

37 responses to “Measuring Up”