I’ve long held the belief that there’s not much that smells better than bread, specifically toast of any kind.

Right now I own two toasters—a cheap one that I got from Walgreens six years ago that still browns my bread to perfection, and one that I received for my birthday that brands the bread with the logo of my beloved Detroit Tigers. 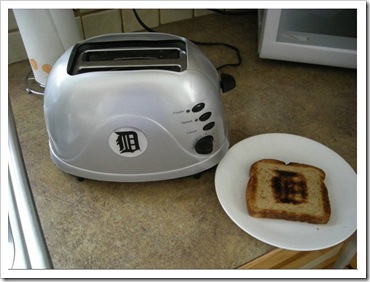 I thought the Tiger toaster was very cool and clever.

With that said, there are some things I just don’t want on my toast. Sunflower seed butter? Bring it on. Vegan margarine? I can’t get enough. The image of genitalia?

Excuse me, but what?

Head on over In the Powder Room to read how with the push of a lever, you can have a pornographic piece of toasted treat, served just for you, and I’ll see you back here later this week.

Like Loading...
This entry was posted in Uncategorized and tagged food, In the Powder Room, Tigers, toast, toaster. Bookmark the permalink.