The War on Wedgies

While I am a grown woman, I’m not “girly-girly” at all, and the description of my wardrobe and beauty regime can be summed up with “comfort” and “if I have to.”

But when you think about it, the things that women do in the name of beauty are rather ridiculous. Do men let strange women attack their face with hot wax? Do they stuff their legs into nylons like a sausage is stuffed in a casing? Do they glue fake eyelashes on their eyelids and stick multiple hoops through their ears?

OK, some of them do, but most of them don’t and neither do I.

But there’s no greater proof than the comfort chasm between the sexes when it comes down to underwear. 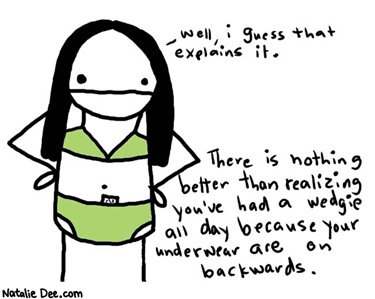 Not all underwear, of course, but the fancy crap.

I get that one is expected to own something a bit sexier than a six-pack of Hanes from Target and agree that everyone should have something small (or medium or large) they can wear that makes them feel good. Even if no one ever sees the contents of it in action, a little extra color or some leopard print design might be just what you need to get your proverbial panties out of a bunch some days.

But let’s be practical, people.

For the cost of one pair of those fancy underoos, you can purchase a dozen pair that you won’t have to try and discreetly pull out of your crotch by pretending to get something from the front of your jeans.

For most men, (hopefully) clean is their favorite color of underwear and they would probably rather have you comfortable and happy instead of distracted by the thread creeping far up your ass.

So to summarize: What’s the point of wearing something uncomfortable that practically nobody else sees anyway? Okay, okay. In the interest of balance, I’ll play devil’s advocate.

Perhaps you are some sex maven that can do a triple back flip off your sex swing with perfect form, and wearing a $45 thong is necessary to complete your performance and dazzle the spontaneous suitors you entertain on a daily basis.

But for the majority of us who have retired the sex swing in favor of a Papasan chair, it just doesn’t make that much sense.

And I have to think that if by chance you are swept up in a spontaneous moment, your suitor most likely won’t care if you’re wearing a Victoria’s Secret four-color, invisible line lacy bikini bottom with magic unicorn dust or a Ziploc bag bedazzled with Puff Paint and scented magic markers.

Save the money and the stress of a wedgie-filled existence.

It’s truly what’s inside that counts.

Like the blog? Buy the NEW book here. Why? It has stories about drunk nuns, Vanilla Ice and adventures at the ATM. It’s obviously destined to be an American classic.

P.S. I’m nosy and have to think a couple of you are nosy, so I’m toying with doing an “Ask Abby Anything” post. If you have questions about anything—me, writing, picking up men in Home Depot—either email me or leave a comment on my Facebook page. If I actually have interest, I’ll use them in a future post that will probably embarrass me.

Like Loading...
This entry was posted in Uncategorized and tagged beauty, natalie dee, underwear, women. Bookmark the permalink.

47 responses to “The War on Wedgies”