If you belong to a gym, you know the New Years crowd will soon descend upon the facility. Machines will be busy, the parking lot will be full and for a good two months the place will swell with momentary motivation, testosterone and a lingering scent of body odor. 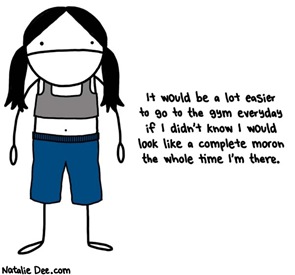 Those who stick around will soon become initiated with certain people and unspoken rules of the gym. And while I’ve talked about this before, it bears repeating as the new crowd looms large.

So if you’re new to the gym scene, here’s a stereotypical primer.

It’s really a win all around.

Like Loading...
This entry was posted in Uncategorized and tagged exercise, gym, holidays, New Years, people are weird, resolutions. Bookmark the permalink.