There are two things I will probably never ever write about with any seriousness on this blog—religion and politics. 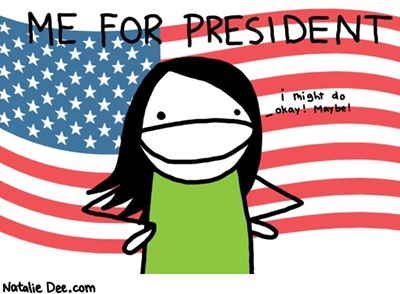 That would be because I’m not religious (although I give the stereotypical eye roll-inducing response that I’m spiritual) and I hate politics. So instead of debating either, I will accept the label of being an apathetic heathen.

You can’t avoid it and they’re all the same.

If a candidate really wanted to get my attention, he/she would make an effort to differentiate their platform somehow. Down with spending millions of dollars on a campaign instead of actually fixing the roads or funding the schools! Down with the attack ads claiming their opponent hates kittens and sunshine!

That negativity doesn’t endear them to me.

Just once I would love for a commercial to end with, “I’m (insert name of candidate here), and I once woke up in the back of a horse trailer with a bra wrapped around my head and the smell of Jager floating up in the air. I approve this message.”

In fact, I would actually endorse a candidate that approved of the following messages and made them part of their platform:

My name is Abby, and I would approve of this message.

Like Loading...
This entry was posted in Uncategorized and tagged natalie dee, politics, religion, sarcasm, society. Bookmark the permalink.

34 responses to “The Campaign Trail”