Breaking news: My house isn’t perfect anymore. There are cat toys all over the place, hair on my dining room chairs and a four-legged creature wandering around—and I have survived the past two weeks.

To be honest, it was rough in the beginning and I’m still adjusting. But if I had to get a cat, Monie has turned out to be the perfect choice. Since a few of you have asked how things have gone, I figured it was time for an update—a few of the highlights and a few of the lessons she’s taught me so far.

She hid under my desk for the first night or so, but was lured out with catnip and a brush. 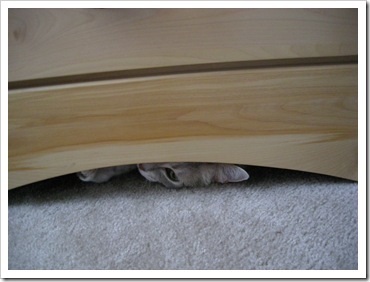 Let that be a lesson, my friends. Legal hallucinogens and massage will do wonders, and I suggest someone sends some over to me ASAP.

I kept shoving her towards food, water, the litter and this cat bed, seeing as I spend a lot of time doing those things myself, and she took to them all pretty quick. 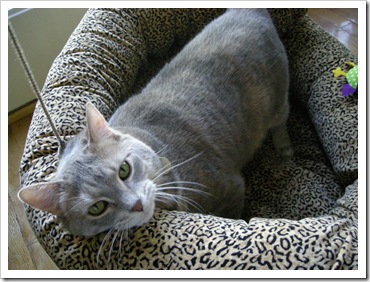 Leopard print cat bed. She is a rock star.

Eventually she executed her plan for world domination by claiming certain spots in the house. I challenged this authority by busting out the vacuum for the first time, at which point she simply shrugged her furry shoulders and walked back to “her” room.

This is a good thing, as the vacuum makes an appearance more than a Kardashian in the news.

Anyway, she sounds like a gremlin when I brush her every morning, didn’t get the memo that 10-year-old cats are supposed to aloof and reclusive and was called “husky” but healthy by the vet. 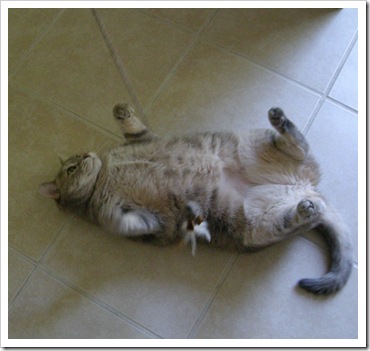 Plus, she tried to eat the same fake plant I tried to water, so apparently she fits right in.

But in an effort to make this post slightly worth your while, I will dig a bit deeper and say she is teaching me a couple things.

First, she’s shown me she’s a creature with a tremendous capacity for love. I was a complete stranger taking her home that day and she was willing to trust and love me almost immediately. I realize she would’ve been that way with anyone taking her home, but it just goes to show that her heart was open to love.

Second, despite her rough situation, she wasn’t defensive or mean (even though I wouldn’t have blamed her if she was.) She was/is curious, affectionate and willing to experience a new situation with courage and joy—and catnip—but not bitterness.

Third, I can unplug. The time before bed I might have spent online/screaming at a blank computer screen is now often spent playing with her. I can also set boundaries and say “no.” When I want my time, you can bet I still take it—despite her whining and attempts to lick me. 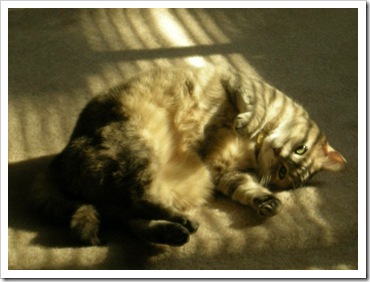 Side bar: She tries to lick me. She’s a weirdo.

And while I’m trying very hard not to get annoyed when she wants attention all the time — I don’t do needy— those times when I do snap at her seem to be forgotten by the next time out paths cross, which is often, seeing as she follows me around. But she never holds a grudge and seems to take things as they are—in that moment—and nothing more.

Finally, if I don’t completely secure my bedroom door at night, I will wake up and roll over to see a 13-pound cat on the pillow next to me.

Buy the book. Save a kitten.

Like Loading...
This entry was posted in Uncategorized and tagged I promise not to write about my cat next time, Monie, OCD, pets. Bookmark the permalink.

34 responses to “Musings on Monie”