If I had to classify my relationship with my hair, I would say “it’s complicated.”

I’ve gone from disinterested (childhood) to horribly dysfunctional (middle school) to high-maintenance (college) back to ambivalent tinged with annoyance and a strong desire to try and bring back the stylish babushka of my grandma’s youth (now and forever going forward.)

But it turns out I have a long history of hair animosity.

I’m told I didn’t have hair until I was about three years old and was often affectionately referred to as a cue ball with kielbasa legs. While all the other babies were wearing little butterfly clips in their hair, I had a bandana stylishly tied around my noggin. 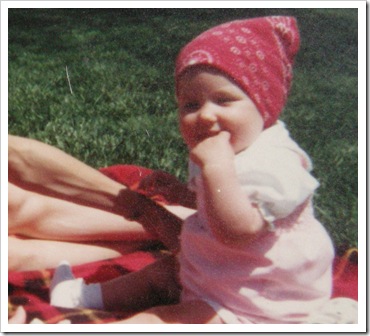 One vote for the babushka.

When I did finally get hair, I still wasn’t that fond of it. One afternoon when my grandpa was “watching” me, I took the scissors and cut off my ponytail, along with several patches of fur from our dog Grover. Ever the organizer, I carefully placed the hair into envelopes and then proceeded to deliver them to my mom upon her return.

As you can imagine, she was thrilled. 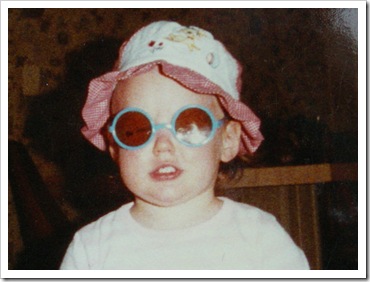 I resorted to more headwear.

My Barbie dolls and any other toy unfortunate enough to have anything resembling hair suffered a similar fate, albeit without the advantage of being able to grow their hair back. This left several scalped carcasses to be used as the perfect plastic projectile for when I was feeling ignored.

But there was a brief period of time in my early 20s  in which my hair was my “thing.”

I went to an overpriced salon and spent $120 every six weeks to get tinfoil wrapped around my head and eavesdrop on the conversations of rich people while I sipped my glass of sparkling water with cucumber.

I’ve done everything from platinum blonde to a dark purple shade called “Orchid.” Now when asked what my natural hair color is, I swear the “Jeopardy” theme song plays in the background.

I stopped going to that salon almost seven years ago when things like mortgages took priority over foils and fancy trims. My natural brown hair is simply there, annoyingly so, mocking me with it’s thinness and a wonky cowlick that prevents me from that trendy side-swipe bang look that would cover my large forehead.

But as long as I don’t look in the mirror, my hair and I get along fine now.

You learn to pick your battles and I waved the white flag years ago—and now might just use it as a babushka.

Like Loading...
This entry was posted in Uncategorized and tagged childhood, hair, pictures, style. Bookmark the permalink.