Not Much Has Changed

I forced my mom to look through her old cedar chest the other day for something for a future post, and along with aggressive letters to the Tooth Fairy and Santa, she came upon my baby book. 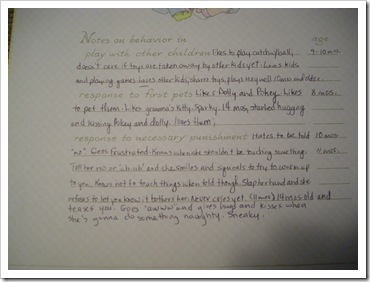 I’ll decode it for you below, but I wanted to show it as evidence.

While I didn’t stick around for the whole trip down memory lane, a couple pictures fell out when she opened to this page and it pretty much cemented the fact that not much has changed since I was just a wee little Abby with mini-issues. 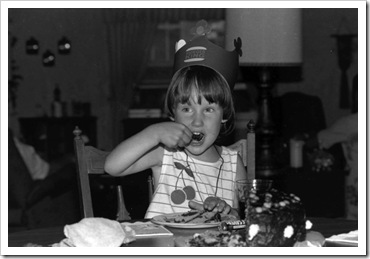 While I doubt that whatever I’m shoving in mouth was organic or vegetarian as it is today, I developed a love for food at an early age. Here I’m so totally engrossed in it that I don’t even ham it up for the camera, which is a rarity.

I can also guarantee that if you got too close, I would stab you with my fork.

With no food in the picture, I started channeling my inner Marilyn Monroe shortly after. This is surely photographic evidence that I was destined for a life on stage. But as we know, Broadway was not meant to be.

Even at a young age, it was evident that I was not mommy material. Yes, I’m attempting to feed that homely doll I named Gert after my grandma’s best friend, but I clearly resent the tedious nature of her neediness.

But the comments under “Response to Necessary Punishment” in my baby book pretty much seals the deal:

“Hates to be told no. Gets frustrated. Tell her ‘no’ or ‘uh-uh’ and she smiles and squeals to try and warm up to you. Knows not to touch things when told though. Slap her hand and she refuses to let you know it bothers her. Never cries yet (11 months) and teases you. Goes ‘awww’ and gives hugs and kisses when she’s going to do something naughty. Sneaky.”

In other words, some things never change.

This post was in response to me accidentally coming across that page, but it also fit nicely into the Studio 30 Plus prompt this week:

Like Loading...
This entry was posted in Uncategorized and tagged childhood, pictures, Studio30 Plus. Bookmark the permalink.

16 responses to “Not Much Has Changed”