Don’t take it personally, but if you call my phone and expect to talk to me at that exact moment, you’ll probably get my voicemail.

This is (probably) not because I hate you.

This is because I hate talking on the phone. 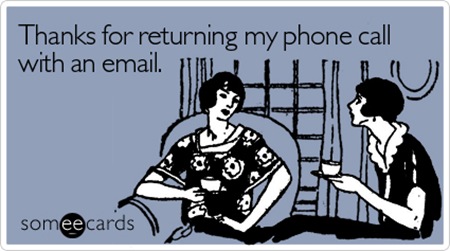 I don’t really regard this as anti-social behavior—I have plenty of those that I can easily identify—because I will text, email and talk face-to-face with no issue, at least for a short amount of time.

And I also understand the importance of talking on the phone in certain circumstances and do so when the situation requires it, but for the most part, I’ll do pretty much anything to avoid using it for more than casual check-ins.

I know this can be annoying, but I have my reasons.

I don’t like not knowing when the call is coming in. When forced to engage in spontaneous conversation without warning, I don’t have time to think up an appropriate reply. This means I could get caught saying any number of ridiculous things simply because I couldn’t prepare what would most likely be an equally ridiculous excuse quick enough.

I do better if I am initiating the phone call myself, as I can prepare  for the communication and  sometimes even "rehearse" the call by going over possible responses in my head. But random ringing? No bueno.

You see,  “long story short” is usually anything but. When my exaggerated sighs and verbal hints to wrap things up and get to the point are ignored in favor of minute story details, I am forced to start banging pots and pans or slamming doors to give the illusion of being extrasuperbusy.

But if all else fails, I can always use the “my phone cut out” excuse. Given the fact that my phone is cheap and does cut out often, this probably isn’t a lie.

It’s completely disjointed and frustrating, and by that point I will have simply forgotten why I called you in the first place. Then I will remember that you probably called me.

I rarely dial out.

Here’s the deal. People are always doing other things while they’re talking on the phone. Unless they’re chained to a landline, you can bet they’re watching TV, surfing the Interwebs, driving or—lord help me—on the crapper while attempting to carry on a conversation.

If you’re going to call me, please focus on that and not if anyone “liked” your witty Facebook status. And if I’m in a bathroom and hear you on your phone telling someone that you’re at your desk or the mall, I will continuously flush the toilet for no reason other than to blow your cover.

If you have a problem with this, just have your people call my people—and leave a message at the tone.

This post was in response to the Studio30 Plus prompt:

(it was so hard to pick just one)

Like Loading...
This entry was posted in Uncategorized and tagged bad habits, phones, Studio30 Plus, talking. Bookmark the permalink.

37 responses to “Phoning It In”