This week I had to go to a work conference in a hotel/casino about three hours from my house. 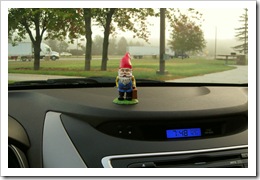 He never even offered to drive. Not once.

So in my mind, the odds of me getting into the car by myself and successfully navigating my way across the state without ending up in Canada or a ditch are about as likely as me flapping my wings and soaring into the hotel convention center like an angel from above.

However, duty called, so I had no choice.  Don’t worry though. I survived, and because I feel the need to overshare my accomplishment/prove to you that you are normal in comparison, I will let you into a bit of my day.

It actually started the night before when I had to rent a car and spent 10 minutes trying to figure out how to turn the windshield wipers off and plug the GPS unit in. Once that was established, I immediately found out the brakes were extremely touchy and managed to squirt breath spray directly into my eye.

Anyway, the next morning I loaded up the car, set the GPS—my first time ever using a GPS unit— and we hit the road. Here’s a quick rundown of my thoughts while on the trip:

I snuck away at lunch to let Uncle June see the casino. What I presumed to be a homeless man gave me an odd look. Not sure what that means.

Unfortunately, all was forgotten by the time I sat down at my computer, so you get this. If someone could invent a GPS for keeping my thoughts in order, I would totally award them a gold star for the day.

As it is, I’m just glad someone invented GPS in general, or else I might still be circling the parking ramp of the hotel/casino, half blinded by peppermint breath spray and singing “Bawitdaba”  at the top of my lungs in an effort to drown out Gail’s “recalculating” taunts.

OK. That might have happened anyway, but at least I made it home.