Banana Blast from the Past

“Among the beautiful flowers at the botanical gardens, I saw a very rare, thought-to-be-extinct species this afternoon: a woman wearing a banana clip in her hair.”

In case you missed the five minutes they were popular in the ‘80s, a banana clip is a cross between some type of comb and a ponytail holder. It allowed you to pull your hair back from each side, with the clip (in its banananess) following the contour of your head in the back.

If you were lucky, the effect was like a mane of hair running down the middle of the back of your head. 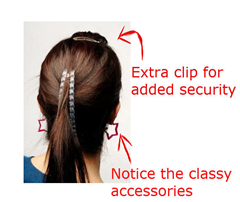 It took me forever, mostly because I usually had straight hair and banana clips kicked butt only if your hair was curly. Plus, I was completely uncoordinated even at an early age, so trying to simultaneously “work” the toothed banana clip before my hair fell out of it resulted in a convulsive dance of head flipping and fashion futility—the first of many.

Once I did actually get it clipped, my straight hair would refuse to hold it in, resulting in a crooked style that looked like a bastardized side ponytail/Joker’s smile. But when I had a perm or crimped my hair—both options that resulted in the smell of noxious fumes, singed hair follicles and a decade of pictures that could now be used as blackmail if ever unearthed—I had a much better relationship with the banana clip.

And while my relationship with the banana clip was turbulent at times, a constant in my childhood was the scrunchie.

The scrunchie needs no explanation or description, as it simply speaks for itself. I will admit that I had about 3,532 of them strewn about my drawer when I was younger, just in case I had to coordinate my scrunchie with my socks or my Swatch watch.

Even if I didn’t have a scrunchie in my hair, I would often wear one on my wrist (the one not covered in plastic bracelets or aforementioned Swatch watch) just in case.

Today a banana clip sighting is much more rare than the appearance of a scrunchie, but it’s still a rare treat to find a woman with a scrunchie—especially if it’s patterned and coordinates with her Day-glo leg warmers.

But even though we laugh about the absurdity of these hair accessories now, let’s be honest— have we really come that far, people? Today we have the Bump-It and feather hair extensions, and people wear them on purpose.

The only way I will wear something called a Bump-It is if it promises to bump up my chest, not my hair, but to each their own. This is coming from the girl that gets wine and hair color from a box, so take it for what it’s worth.

And if it’s a banana clip, it’s probably worth about 75 cents at a garage sale—and a good laugh.

Were you Team Banana Clip or Team Scrunchie? What other hair accessories were you rocking in the past?

(Or now. No judgment, of course…at least not that much.)

33 responses to “Banana Blast from the Past”