Today we will be moving from dining room drama to Opening Day of baseball season in the activity room. 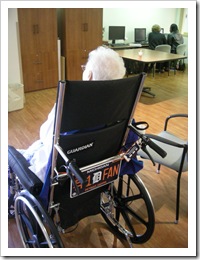 Gram in her throne pre-game.

If you know anything about me or my family—I tend to overshare here—you know that there are no bigger sports fans than me, my mom and my grandma (G.) Needless to say,  I am super excited that baseball season has started, and considering I don’t get excited about much other than food, sunshine and sleeping—preferably in the sunshine—this shows the magnitude of my love of the game.

And much like the bump on my nose, the love of the game is genetic.

Even though she can’t remember what day it is, G can tell you who played first base in 1968 and who pitched the third game of the World Series. This is the woman who Ernie Harwell knew by name at the games and who kept a mini souvenir Tiger bat under the seat of her Cadillac to ward off hoodlums that drove white vans with no windows.

So per tradition, I took the afternoon off of work to watch the game with mom and G. While we didn’t get to raise the Tiger flag outside as we had year’s before or hang up the banner in her room (damn fire code), we still had our own little watch party. 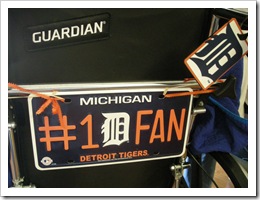 At first it was just the three of us. Then another resident got wheeled in, then another, then another until there were close to 10 residents and a few nurses—all women—watching the game.

It wasn’t like being at the ballpark or at a sport’s bar, but that’s not necessarily a bad thing—especially for me, considering my desire for social interaction is limited to the clerk at the grocery store.

Gram got tatted up while eating the peanuts.

So even though it’s possible this was a closing chapter on our Opening Day tradition, I wouldn’t have had it any other way.

I take that back.

The Tigers could have won and saved us from the post-game overanalysis of a certain 89-year old woman convinced she would have led the team to victory, but then again, it was just another Senior Moment.

And she was quickly distracted with a chocolate bar.

Like Loading...
This entry was posted in Uncategorized and tagged baseball, family, old people. Bookmark the permalink.