It started with Goldfish crackers. 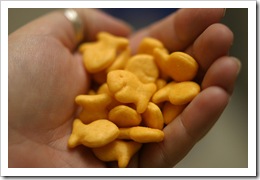 While the details are fuzzy, I remember that it was sometime in October and that on this particular day it was raining outside—indoor recess. Stuck to the board was Wilbur—a brown (felt) bear the first-grade class dressed each day with weather-appropriate clothes. Sporting a yellow rain slicker, boots and an umbrella under a (felt) gray cloud and a handful of raindrops, there was no question as to the conditions outside.

The conditions inside most likely included a fascinating discussion about shapes, colors and the pros and cons of multinationals and globalization in a modern society. That’s not important. What was important was the seating chart, for the stars were aligned—or grossly misinformed—and my desk at the time was conveniently located in a block of four with two of my best friends, both boys and both my neighbors.

Yes, they participated in the deterioration of Barbie’s reputation.

For the sake of their self-proclaimed innocence, let’s call them Mike and Danny. Danny was my best, best friend, but I kept Mike along for the ride—even marrying him once or twice in his basement and often skating sweaty hand in sweaty hand to couple’s skate at school skating parties in later years. He served a role.

With the polygamous nature of our playgroup, I think Mike knew and served this role well.

As for the day in question, we were doing some sort of math exercise that involved using Goldfish crackers as counting pieces. The details aren’t important, but what is important to note is that Danny had to leave for weekly speech therapy. His Goldfish crackers,  unmanned and vulnerable, would not be joining him.

I was hungry—or I just wanted them, again the details are fuzzy—and the Goldfish were consumed. Mike wanted in. I obliged.

Mike cried like a kindergarten baby, blubbering out promises to give our lisping buddy all the Halloween candy he anticipated hoarding in the coming days.

I was stoic, annoyed with both the interruption and the insinuation that I had done something wrong. I knew I should feel bad. The reaction from my teacher, the sobbing fool next to me, and the quiet hush that had fallen over the class were telling me as much.

But it was Danny. It was crackers.

So while the teacher was lecturing the class on what was most likely the importance of sharing and stealing, I was building a solid argument up in my head. I wasn’t a criminal. I knew right from wrong, good from bad, snacking from stealing.

There were countless times before and would be countless times in the future when Danny would take (and eat) things that were mine, when he would participate in some plot against my scheduled script of play, when he would be told to “get off my property” or kick me out of his tree fort. I failed to see the importance of a handful of crackers that could be easily replaced and forgotten.

It was Danny. It was crackers.

Emboldened by my rationalizations and oblivious to danger, I looked left. I looked right. I looked down at the remaining fish on Danny’s desk, baiting me as they were with their innocent smiles and bright orange glow.

It started with Goldfish crackers.

It ended with crumbs.

This post is in response to this week’s  Red Dress Club RemembeRED prompt to “Mine your memories and write about the earliest grade you can recall.” I’m sure I have others, but this one popped up first.

It’s time for show and tell. What’s the earliest memory you have of elementary school?

Like Loading...
This entry was posted in Uncategorized and tagged childhood, food, friends, Red Dress Club, school. Bookmark the permalink.