People who actually use the word “snowpocalpyse” should be dragged out back and beaten with a wet noodle. It’s not clever, and in fact, it’s quite annoying.

These same people most likely shorten the name of things that are already shortened or combine the two names of a couple. I repeat—it’s not clever, and in fact, it’s quite annoying.

Pardon me if I sound a bit cold—emotionally, not physically—but I am in Michigan and they are once again predicting the biggest storm of the season to hit later this week, with around 10-16 inches predicted for the area. 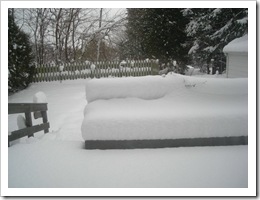 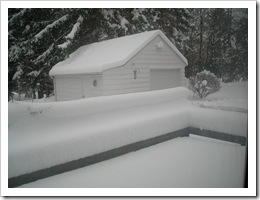 This was last year’s storm of the season.

If you live in a state that actually has winter—and 50 degrees does not count as winter to all you California dreamers that complain about rain—you expect that snow will be part of the forecast. But whether it’s because we’re all stuck inside for these cold winter months or because CSI: NY is in reruns and we’re bored, people tend to go crazy and get obsessed with the weather (and use words like “snowpocalypse.”)

Here are several things that will happen:

I’m not saying I like the snow— I don’t—but it’s expected and inevitable. I am exponentially less pleasant to be around when we lose power, so as long as that doesn’t happen, I can survive.

(And for all of you who tell me to move to a warmer climate, thank you for the suggestion. That will be feasible as soon as I am discovered as the next “Dear Abby” and given a column and condo in California or swept off my feet by a tropical Romeo. The likelihood of either being less than that of a “snowpacalypse” in hell.) 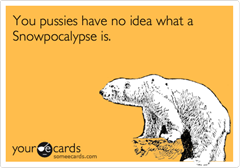 That, my friends, warms even my cold little heart.

Like Loading...
This entry was posted in Uncategorized and tagged advice, snow, weather observations. Bookmark the permalink.