I’ll do a more “deep thinking” e-mail when I have time, but for now, you’re getting Houston Quickie By The Numbers Part 2.

2: Parties that our company successfully put on at the House of Blues and Minute Maid Park

It was baseball themed. I wore a jersey over my dressy clothes. Win-win.

This is actually from last year, as I don't have new ones back yet. Same place, same idea.

100: Times I said to myself, “You are such a white girl” while busting my moves on the dance floor.

6: Cups of hot water I have asked for from the hotel Starbucks for my hot tea. It’s free, but I tip. While I do have my own cups in my room, I like the cups.

4: Single-serve Justin’s Nut Butter packets I brought with me as part of my backup plan.

This is just a tiny sample.

50: Pairs of shoes that I drool over every single year at the booth of one of our advertisers.

3: Years running that this is still my favorite one. It’s called “Mardi Gras.” Party on.

2: Times I ate at YAO Restaurant, a place about half a mile from the hotel. I wish time had allowed me to go back every single time. 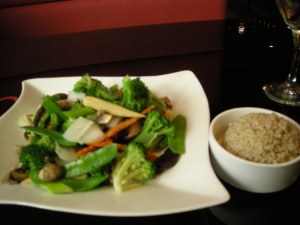 Why? Because it was one of the only places I could get a huge bowl of brown rice and steamed veggies.

2: Times I ordered the same thing, as it was a lovely break from all the other options.

4: Larabars that I brought with me as part of my backup plan. 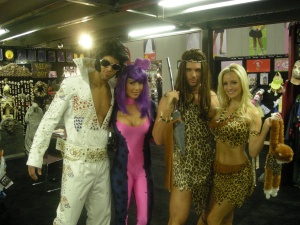 Dozens: Of people walking around in fun costumes.

Dozens plus profanity: Times I tried to flip this picture normal, but for some reason was unable to. I wouldn’t have included it, but after spending so much time messing with it, I had to include it on principle.

4: Fashion shows attended to show off all these costumes.

Bridget Marquardt. I love her.

1: Original “Girl Next Door” that I got my picture taken with and autographed picture of.

1: Delicious sandwich I had for dinner Sunday night–finally a good sandwich after a couple failed attempts and empty promises.

7: Attempts to try and take a picture of the damn thing with “romantic” restaurant lighting and my lack of photography skills. Fail. I just want to eat the damn thing, not give it a glamor shot.

Different from my avocado sandwich monstrosities, but in a very good way.

Maybe 1 or 2: Times I actually had the urge to hop on the computer and read blogs, check websites, etc. Sorry, but I enjoyed the break and change of scenery. A lot.

-8: The temperature back home when I got up this morning and checked the computer.

0: Minutes I will complain about it until I get my own bed, own shower and own food (then I might start back up–no promises.)

Probably 3: Days it will take for me to get caught up on work, laundry and home stuff without feeling manic and off kilter.

So, that’s just a quick recap, as I had a couple minutes before diving back into some more work. We will return to your irregularly scheduled ramblings next week from Michigan.

What have I missed with you in the last few days? Fill me in…

Like Loading...
This entry was posted in Uncategorized and tagged eating out, Houston, travel. Bookmark the permalink.