I have to admit that I’m a bit of a curmudgeon in that I get rather annoyed with all the technology  today. Yes, I have a cell phone, but only to make calls and occasionally text—not split the atom and  then post pictures of it on my Facebook page from the bathroom of a restaurant I read good things about while browsing the Internet on my phone as I was forced to wait a whole two minutes in the check-out line of a grocery store.

And yes, of course I love the Internet and being able to find anything at any time (for better or for worse.) But it seems people today need either batteries of some sort or a charger to keep occupied (no, not in that way.) And when I read that most teens send and receive around 2,200 texts a month, I almost shit a brick.

Call me old fashioned, but that sounds a bit excessive even to me—the queen of OCD. What happened to genuine creativity and creating fun things to do with our time? Way back when I was little, we didn’t have “apps” for everything. We trudged uphill to school every day with wild mountain lions and rabid pigeons chasing us. But when we came home, we didn’t park it in front of a screen.

We went outside, played some demented form of “school” in which everyone got yelled at or tortured our Barbie’s and G.I. Joe’s with seemingly innocent household appliances and supplies.

And when all else failed, we played board games. I was an only child, so any time I could rope someone with my  into playing a game with me—this might or might not have involved seemingly innocent household appliances and supplies—I did.

Now that the holidays are upon us—fa la la—all the toys and games are plastering the shelves once again. While electronic stuff is big, I was delighted to see that many of the classic games I grew up with are still prominent on the shelves.

This list is far from all-inclusive, but here were a few of my favorites in no particular order. 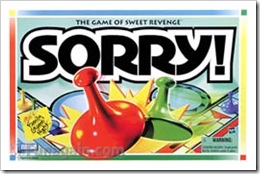 Side note: This created a separate game of “where the hell did my piece go?”

And as anyone who has played this game can attest, the best thing in the world was drawing a “2” followed by the backwards “4.” 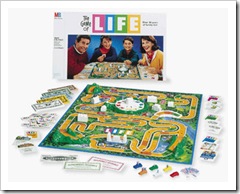 “This game has paydays, marriages, babies, revenge and chance. Spin the wheel to decide where you go next.” Well, anyone who has ever played this game more than once knows that the biggest challenge wasn’t getting a good job and retiring a millionaire, but rather not losing all the little peg people and cars.

And why is there was no square for spending thousands of dollars on therapy, landing a role in a reality show (go back to “start”) or finding a rich sugar daddy with one foot in the grave and the other on a banana peel?

Perhaps they should update this “Life” thing. 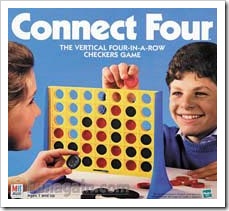 Just look at the expression on that boy’s face and he realizes he has four-in-a-row with a knock-off Checkers piece! Who could not love this basic game? I’ll tell you who, anyone who had to play more than four “tie” games in a row with someone who refused to change their game plan. But all in all, good times. 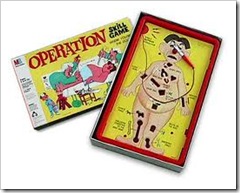 The point of this game was not to only to remove various body parts and disturbing objects from this morbidly obese patient with bad hair, but also to annoy the crap out of anyone not participating in the game itself.

Each time those tweezers hit the sides of the game, lighting up that nose and launching that irritating buzzer, parents everywhere searched for dull objects of their own to poke into their eyes. Smart parents never replaced the batteries. 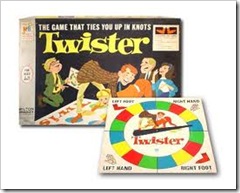 “Operation” was a game you could play by yourself, but “Twister” was most certainly a multi-player endeavor. We didn’t play this that often, but I found it much more fun when I got older and “left hand red” was possible only if there wasn’t a beer in it already. 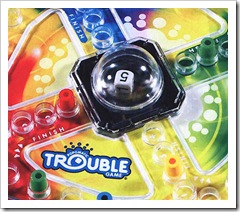 Most of the appeal of this game involved the sound of the Pop-O-Matic and not really the journey around the board. Still, you could send your opponents’ pieces back to the start by landing on them and you could never lose the die. 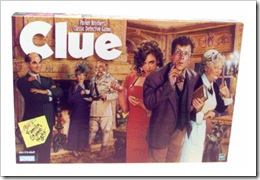 This detective game involved a bit of thinking, except when it came to the origins of the colored piece’s names—Col. Mustard,  Miss Scarlet, Prof. Plum, etc. It was just good ol’ fun involving various weapons and accusations about which of your competitor’s committed a crime, with what and where.

A great game for those who enjoy reasoning and thinking things out, which is possibly why I could never get people to play with me. 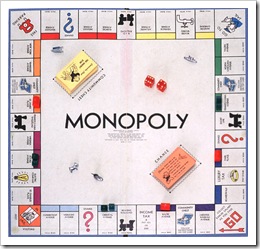 Speaking of never getting people to play a game with me…Monopoly. Longest. Game. Ever. This game could seriously take hours and hours, although I don’t really know first-hand that there is an end, as I grew impatient and usually quit before the conclusion.

All I knew was that I loved the Railroads, the banker probably cheated, picking your game piece was of the utmost importance, no one could ever agree on what “Free Parking” entailed and it was ridiculously funny when a boy drew the “You won $10 for second place in a beauty contest” card.

At any rate, my mom did give in and buy me a Game Boy for our trips up north. One of my favorite games? Monopoly, of course.

So even though I appreciate all the innovations and technologies available to me today, I’m glad I grew up when I did. A lot of creativity and fun can come out of a lack of resources when you’re forced to use your imagination and not your iPod.

In an age of constant electronic headlines, messages and updates, it’s good to see these board games are still around. After all, you need something to do when the power goes out, right?

What was your favorite board game when you were younger?

If you had to pick a board game to represent your personality or life, what would it be and why? Risk? Uno? Candy Land?

Like Loading...
This entry was posted in Uncategorized and tagged childhood, games, random musings, technology. Bookmark the permalink.